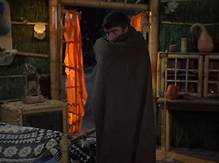 Jakers followed Dr Berens down the Vintage Wing of the sleep clinic. As pricey as the insomnia treatment was, Jakers had sprung for the full package, which included a special extra based on his choice of sleep environment: a season of Gilligan's Island that never filmed.

"I still can't understand how it's possible," Jakers said as they turned a corner.

"Quantum computer," said the man with a disturbing resemblance to Chris Lee. "It analyzed shows, cast, locations, then predicted where the series was headed. You've seen animated films so real you had to do a doubletake. This achieves full reality. Let's face it--people got tired of watching Gilligan blow the rescue chances, and all the bullying from hostile tribes. The season opens with Wrongway Feldon landing his biplane. As 'king' of a neighboring island, he has access to shipping lanes. He's brought along goodies like portable TVs and coffee, but won't help rescue them because it could jeopardize his own utopia."

"What about hostile tribes?"

"Feldon gives the skipper an old Army Browning automatic. He mows down some invading headhunters, and that's the end of that plot line."

Jakers winced. "You call that comedy?"

"It reflects what viewers would do if stranded on an island." Berens opened a door to the Gilligan Suite. It was uniformly bare save for a cot and end table.

"Treadmill, Mr Jakers. You can explore your surroundings in the hologram world. No matter how far you go, only the background moves, just like in video games."

"Ingenious." Jakers settled onto the cot, noted the stores in the table: coffee, water, a candle tripod, snacks. "Cozy. I should be able to sleep if it's all you say it is."

"When the program starts, you'll be in the hut shared by the skipper and Gilligan. They'll react to your speech, but otherwise won't bother your repose."

"Only enough to tire you out and get you relaxing."

Jakers got started right away, the time being ten p.m. The sudden shift was startling. There was the skipper at his disk, sharpening a knife by candle light. Gilligan lay in his hammock reading a comic. Wind rattled the bamboo and fern frame. Through a chink near the ceiling, a distant blue horizon lay under scudding black clouds.

The skipper looked up. "This isn't keeping you awake, is it, Mr Jakers?"

Outside, palm trees rustled and swayed. Jakers couldn't believe it--here he was on Gilligan's Island. Nearby were the other huts. Mrs Howell, in bathrobe and head wrap, came out to douse the communal torch outside her door. Here was a chance to test the program.

"Mr Jakers! What brings you out in the cold?"

"I don't know how to put this; it seems Gilligan has a secret thing for you."

"Yes, well, good night." Jakers went back inside and made coffee. Gilligan had dozed off, and the skipper watched Hogan's Heroes, the light flickering on his face.  Jakers slid under the blanket, warm and cozy against the gathering storm. He listened to wind and rain, set his coffee down, suddenly drowsy.

Was it a dream, or just the program? Gilligan was gone, and the skipper slept in the hammock below. The rain had stopped, and silvery clouds sailed past the ceiling chink. As his eyes adjusted, Jakers saw a shadowy figure by the shutters. He got up to investigate.

Gilligan came into the candle light, a shape from a Saturday horror show. "Good evening. I am the vampire."

That episode had been one of Jakers' favorites. Now it had intruded here, but was it dream or hologram? With a cry of alarm, he shouted the "safe" word that ended the program.

Some time later he awoke in the familiar confines of a barren room with Berens looking down at him.

"Had yourself quite an adventure, I see. How did you hurt your neck?"

Jakers touched the twin sore spots that had scabbed over on his throat. "This is dangerous, Doc. I'm dropping out. Send me your bill."

Berens followed him out. "It's all relative, you know. The experience relies on your thoughts as you drift off into the dream plane. Want to get better acquainted with Ginger and Mary Ann?"

That stopped Jakers' headlong flight. He turned. "Are you saying that's possible?"

"Anything is possible in quantum dreams."

Berens clasped hands contentedly as Jakers walked away. Another five grand in the bank. "Bread and circuses. Give the masses what they want while the walls close in."

Posted by Nick Nuko at 5:26 PM
Email ThisBlogThis!Share to TwitterShare to FacebookShare to Pinterest