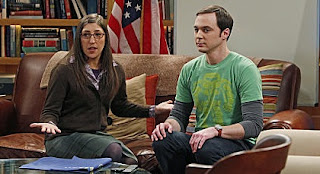 "Good evening out there in computer land. This is Dr--not the medical kind--Sheldon Cooper. With me is my associate Amy Farah Fowler."

"Also a non-medical doctor," Amy said, pushing at her glasses.

"Ah yes, that was remiss of me." Sheldon patted her thigh. "We're going to present clever license plate sayings for you to figure out. This will observe the convention of no more than eight characters. Keeping in mind this country's abysmal average IQ, I will offer a clue for each one. Our first entry means 'highly valued'."

An old-maid frown creased Sheldon's brow. "Good lord, man, how can a misbehaving pet be considered of high value? Never mind. Our next entry is courtesy of Amy."

"And here's the clue," Amy began. "Sassy and unapologetic!" Her card displayed SOSUMI.

"It's a type of Japanese cuisine!"  crowed a young woman.

Sheldon imitated cricket song. "Another frustrated comedian. Come on, people, you can't be that dense. Try this one, whose clue is 'uncommitted'."

Sheldon had head in hands. It was necessary for Amy to continue.

"Try this one, folks. It means 'marginal existence'."

"Skate and goodbye!" a caller announced.

"Like our ill-fated endeavor," Sheldon lamented, "this one has to do with a dearth of luck."

Amy put a consoling hand on Sheldon's. "Perhaps 'dearth' is a little highbrow for this audience." She held up the next card. "It means 'impecunious'."

Sheldon's eyes rolled. "Now Amy, you know 'impecunious' is going to knock them for a loop. Now, kids, here's our personal picks. Amy will display hers first."

A gruff, country-accented voice came on. "I.K. and Y. It's a business, maybe a railroad."

Now Amy had head in hands.

"You can't say that on the internet!" objected a matronly voice.

"What, what?" Sheldon protested. "It's 'Shutters', my proposed operating system versus Windows."

"Perhaps," Amy offered, "that first vowel is a tad ambiguous."

Sheldon glowered at the web cam. "This is Sheldon Cooper signing off until our next Fun With License Plates." He shut the laptop. "Good lord."