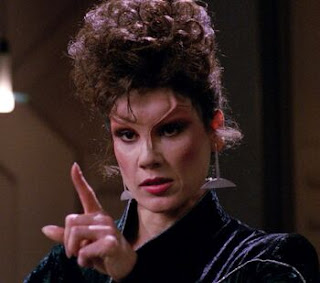 Ever been unhappy with how an episode ended? The solution: rewrite it more to your liking! Herewith an alternate take on the STNG episode "Devil's Due". Marta DuBois, the Panamanian actress who played Ardra, was a super neato gal. I imagine a better outcome for the character.

Captain Picard's confident face helped assure President Jared that Ardra's hours were numbered. The senate waited fearfully for her appearance at a hearing she had agreed to. If she could prove being a "goddess", the Federation had no choice but to honor her claim to the planet.

"Have faith, Mr President." Picard practically beamed. "This woman is a fraud. She's using a stealth ship to power her parlor tricks. I'll have my chief engineer explain how we'll unmask her." He touched his comm badge. "Picard to LaForge. Is all in readiness?"

"All set, Captain. We'll direct a tachyon pulse at the tectonic plate, so you can create an earthquake on command. Then we'll envelope you in a hologram so you can alter your appearance like she does. When it's her turn, we'll disrupt her ship's transmission--she'll be impotent!"

Jared relished watching that happen. "Excellent. Now we wait for her to take the bait. I can't wait to put her in irons."

Minutes later, Ardra made her usual flashy arrival in an energy cyclone. She looked out imperiously from Jared's seat, now serving as her impromptu throne. "What's this about Picard duplicating my feats?"

"Quite simple," he said. "I'll summon a quake just as you do." Picard raised a hand and caused the ground to tremble, drawing surprised murmurs from the assembly. "Next, I'll alter my appearance." He briefly became a clone of Jared. "What you've just seen, folks, is routine technology from my ship. I'd like to challenge Ardra to do anything--anything at all." He smirked.

"As you wish." Ardra swept a hand, shaking the place so hard that urns crashed to the floor. Some of the ladies screamed. "How to alter my form. . . let's try this." She became a duplicate Picard for a few moments, causing gasps of dismay.

Jared turned a betrayed look on Picard, matching his own expression. "How do you explain that, Picard?"

"It's very simple," Ardra supplied. "My stealth ship was just an illusion to see how far these people would go. What say you now, Captain?"

He remained unmoved. "I still say you're a fraud, madam, and I intend to prove it."

"Really." Ardra touched her temple in exasperation. "Reconsider, because I'm losing my patience, little man." Picard shrank to half size, which left the crowd speechless. "I give you one solar day to think about it, before the same thing happens to your ship. Begone!" Picard vanished, sent up to an astonished bridge crew aboard Enterprise. "That man simply doesn't like me."

A crestfallen Jared approached. "I suppose we're left at your mercy. What shall--"

A trio from Enterprise beamed down:  a short Picard, along with Data and Counselor Troi.

"We seem to be at an impasse," Picard said. "The Federation will not sit by and watch you take over a planet."

The diplomatic Troi replied, "He doesn't like what you represent: power without consequence."

"Posh!" Ardra rose and grew to double height. "He's wrong, you know. There are things that even I can't get away with." She stared down at an angry Picard. "Some guys  like big girls." He didn't find that amusing. "The problem is how you people simply can't believe in magic. Am I right?" She reverted to normal size.

"Science," Data said, "when sufficiently advanced, can appear like magic to those unfamiliar with high technology."

Ardra shook her head. "Mr Data, you have no imagination. Here's what we'll do: I'm prepared to make Picard a believer in magic. It will require a short trip off-planet. Are you game?"

"I could never resist a good mystery," Picard decided. "And if I'm not convinced?"

"Then you can stay three feet tall. We'll meet here tomorrow." She started to saunter out.

"Ardra--" Troi pointed down at Picard.

"Oh, very well. A temporary reprieve." She waved her arms, and Picard grew to normal height.

Posted by Nick Nuko at 11:01 AM
Email ThisBlogThis!Share to TwitterShare to FacebookShare to Pinterest